Hashimoto's disease: what do you do if you suspect a thyroid disorder, but the doctor doesn't find anything?

A slow-working thyroid gland without knowing it? That is quite possible. Many patients with a slow thyroid gland do not notice this for a long time. However, sometimes there are clear indications, but the regular tests at the doctor's don't show anything. What do you do then? This happened to 21-year-old Karin. For years, doctors couldn't figure out what she had, but thanks to a test from Blood Values Test, there is finally clarity: she has Hashimoto 's autoimmune disease, which slowly leads to damage to her thyroid gland and therefore to other organs and her immune system.

Karin has been walking around with symptoms such as fatigue, low blood pressure, unstable blood sugar levels and dizziness since she was thirteen. Complaints that many thyroid patients have. Doctors waved it away under the heading of 'puberty', but that wasn't it. "At one point I thought: am I crazy? In the past decade she has been to a GP at least eight times. And every time she came home empty-handed. "It made me despondent. The GP only tested for TSH, but - like many others - nothing came out of that. GP protocol is that if the TSH is good, no further testing for free T4 is done, so that was never done in Karin's case. 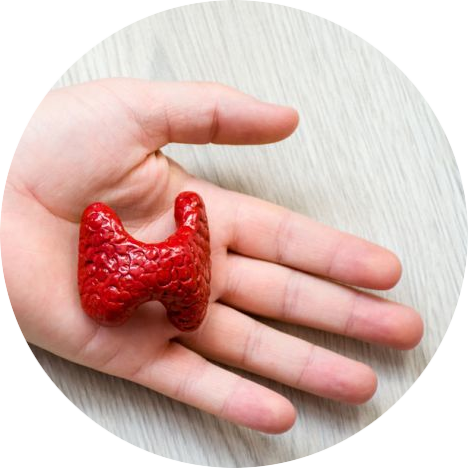 Hashimoto's disease is often accompanied by vague symptoms that can also be attributed to other illnesses, such as tingling fingers, hair loss, low blood pressure and fatigue. General practitioners are therefore quick to think of burnout or overwork. Usually the function of the thyroid gland deteriorates so slowly that patients do not realise for a long time that they are ill. Only later do the symptoms appear and sometimes the doctor finds an enlargement of the thyroid gland on physical examination, a goiter.

In Hashimoto, the body makes antibodies against the thyroid protein Peroxidase (TPO). These do not directly threaten the thyroid gland itself, but they do cause autoimmune inflammation in the small, butterfly-shaped organ. TPO also destroys the thyroid tissue.

Taking matters into your own hands

When I went to university the symptoms got worse. She got yellow hands and feet and other people noticed that too. She was referred to the gastroenterologist (MLD-doctor), because they suspected that something was wrong with her liver. After all, jaundice is usually related to liver problems. But the MDL-doctor also sent her home with the message that I was a healthy girl.

She took matters into her own hands and went online to find a solution. "I googled blood values and yellow hands and feet. It had to be my thyroid." Karin bought a test from Blood Values Test and what did it reveal? She has Hashimoto's disease. "I felt so much relief. Finally something was found!" A day before she got the results, she had fainted and had to stay in the emergency room for some time until she felt better.

Meanwhile, she has also been to the endocrinologist. "That was very nice. A thorough examination was done and it showed that my adrenal glands may not be functioning properly either." The combination of Hashimoto's disease and malfunctioning adrenal glands causes a considerable disruption in the body. An adrenal stimulation test was recently done to clarify the situation, but the results are still pending.

In the meantime, Karin has adapted her lifestyle somewhat and has been able to reduce her symptoms with the help of as few medications as possible. There is no standard diet for patients with Hashimoto. What helps one person may actually cause symptoms for another. "I follow the Paleo diet, but I do eat potatoes and rice. Those products don't cause any problems. I don't eat gluten or beans. I don't eat pasta either. The other day I ate pasta again and a day later I was yellow," she says in a cheerful, yet unsurprised tone. She also regularly has to throw up when she eats something she shouldn't.

Karin doesn't take thyrax or other thyroid medication, but she does take a thyroid extract that contains a small amount of hormones. "This makes me less yellow. I also take herbs and supplements for my adrenal glands that make me sleep much better." Since Karin has known the results, she has felt much better. She has been able to adjust her diet accordingly and now knows what to look out for. "The difference between a year ago and now is really big."

Do you suspect a thyroid disorder? Test yourself!

General practitioners often only test certain blood values. Via Blood Values Test you can perform various tests that will give you insight into the functioning of your thyroid gland.

You have a choice:

* A test through anti-TPO and Anti-TG finds out if you have Hashimoto's disease;

* and many more tests that can be purchased when thyroid disorders are suspected.

About the author
Ellen van Gijsel
Website
Ellen is the founder of Blood Values Test. She gained her experience with health examinations for companies, schools and government institutions at HumanCapitalCare arbo- en gezondheidsdienst. In 2009 she became director of Diagnostics Netherlands, a collaboration between all major general practitioners laboratories in the Netherlands. At the U- Diagnostics laboratory in Utrecht, she was responsible for blood testing at GP surgeries. Until she founded Blood Values Test for individuals in 2013.
Post comment
Edit article Dashboard Settings Website Design Article cached on Tue. 27 Sep 15:29
Renew cache