When are which covid-19 tests possible? When can you see which antibodies?

It is becoming increasingly clear how the virus behaves and when in which way the infection is detectable.

One survey provides this picture: 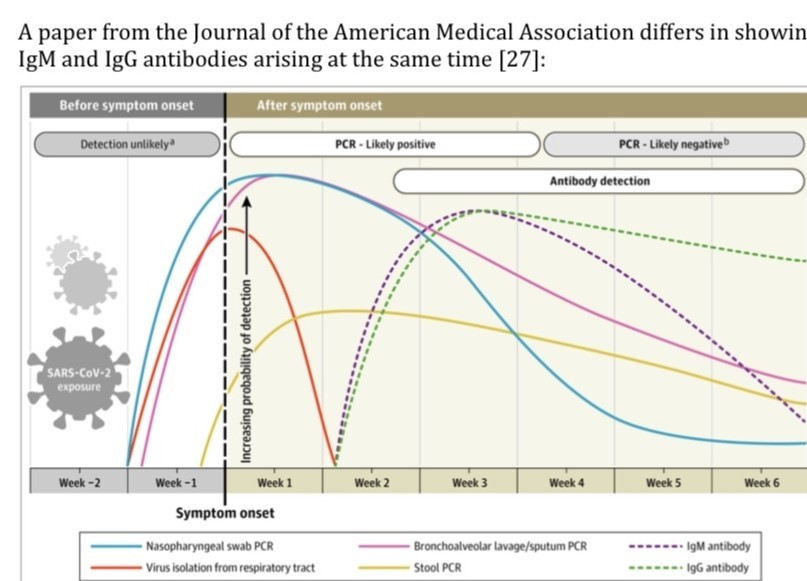 Infection occurs in the first two weeks before the first symptoms of illness.

From 1 week before the first symptoms of illness, the virus is detectable via a throat/nose swab PCR test.

A few days before the first symptoms of illness, the virus is already detectable in the stool and there it remains visible for a very long time.

While in the nasal and throat mucus it is almost undetectable after only 3 weeks to 4 weeks.

Up to this point, there is no end date to be given when the IgG antibodies to SARS-CoV-2 disappear because the disease has not been around for that long.

With SARS-CoV-1 this was 3 to 5 years. What having IgG antibodies says about immunity and whether disappearing antibodies means you are no longer immune is not yet known.

More and more is becoming known about antibodies to SARS-CoV-2.

Studies indicate when which types of antibodies are visible over time. 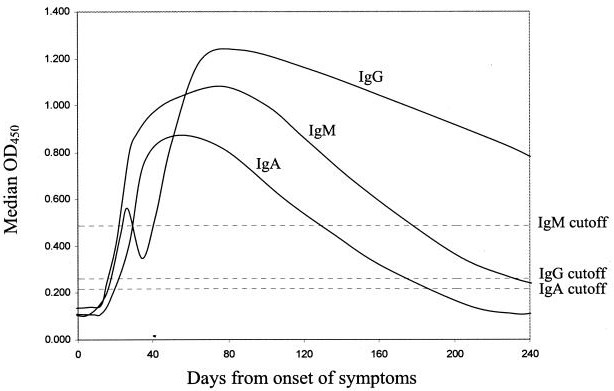 This graph shows how many days after the first symptoms of illness the IGM, IgA and IgG become apparent.

Then the IgA antibodies

and only later the IgG antibodies, but they do stay on the longest.

The study below indicates that the immune system starts producing IgM antibodies about 10 days after infection and that IgG antibodies emerge after 14 days. 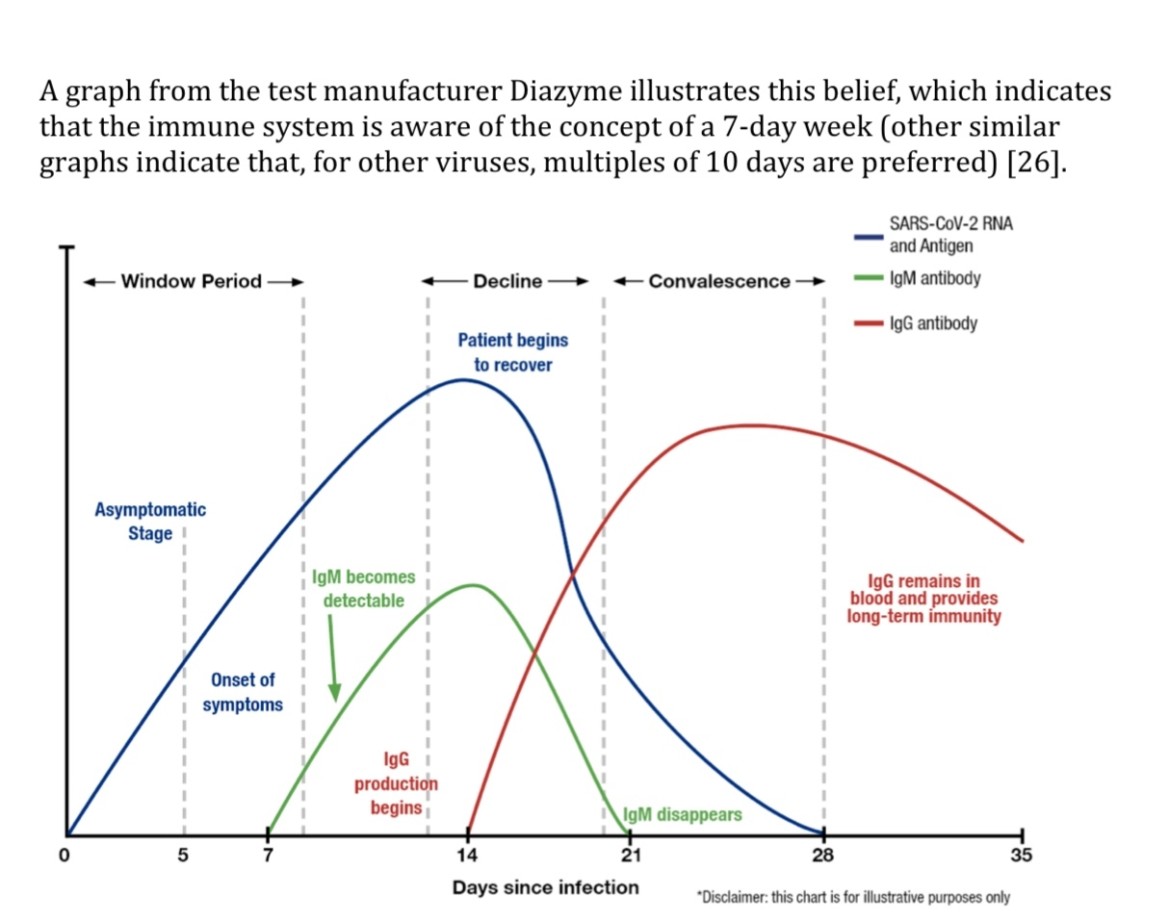 Strange; the Diazyme study states that IgM production starts 10 days after the moment of infection while the Journal of American Medical Association states that IgM production only starts about 9 days after onset of symptoms. It is remarkable that the studies apparently differ so much in this respect; the difference is about 2 weeks. It is even stranger that the IgM antibodies in the first study have already disappeared after 21 days while in the other study they only emerge about the same number of days after the infection...

With such a new virus, it is important to monitor multiple studies until the common thread is clear.

You're talking about two studies with vastly different figures. One study says 10 days and the other study says nine days. You're making a difference of two weeks. 1 week has 7 days, two weeks 14 days. 10 days - 9 days is according to my math 1 day difference. So 9 days, could be 10 days, then I come up with : NO DIFFERENCE AT ALL????

Question about the results of a corona test: if I have "normal" flu and get tested for corona, will the result still be positive, even though I don't have corona? Can't believe that, but heard it from someone in one of the many corona conversations. This person claimed that among the corona infections that we see on TV every day, there are also the normal flu cases, but this is reported as a corona infection.

That's not true. Flu is caused by an influenza virus, Covid-19 by a coronavirus. They'll filter that difference out in a test.

That is indeed a very rare possibility, when someone puts his mouth mask on a table in a catering establishment and dead virus particles end up on the mask, which you then inhale later. At that moment, you can test positive anyway, but the blood result is negative. The PCR test itself that is used, only reacts to the SARS coronavirus type 2, not to other variants of corona. If you follow the conversation closely, you can feel between the pixels that it is a set up conversation, with someone who has never undergone a pcr test. If you follow the eyes, you can already see that the lady has learned a conversation by heart, of which she will roll her eyes in the direction of the learned memory and not in the direction of the memory where the experiences are. Too bad that not more people have these psychological insights, because then people would be able to unmask these criminals immediately.

Unbelievable what disinformation. Sad is the least of it.

A conspiracy channel for the wappies. Just hilarious.

I'd like to see a scientific source for this

The first graph shows that a PCR test is likely to be positive in the first three weeks after the first symptoms of illness, whereas one is considered infectious only in the first week (or first two weeks in case of very severe course with hospitalization). In the fourth to sixth week after the first symptoms, the PCR test is probably negative, but this is not certain. So it is certainly possible for someone who happens to have the flu to test positive for corona due to a previous infection, but that does not mean the test will be positive due to the flu virus. In addition, there is still a very small proportion of false positives and not everyone who tests positive for the PCR is also infectious, as the test is very sensitive. The claim that you can test positive for corona with the flu is true if you take it literally, but that is not because of the flu but because of a recent corona infection or the very rare false positive test.