Why calorie counting doesn't work and sugar is our enemy

Fat and protein are not the enemy. Sugar is the real assassin, says renowned endocrinologist Robert Lustig. The American has been fighting the battle against sugar for years. According to the doctor, scientist and multiple book author, sugar is just as harmful as hard drugs and tobacco. Why is this so? What is Lustig's view on food? And why doesn't counting calories work?

It's not surprising that the number of overweight people continues to rise, because there is a lot of contradictory information available about food. As a result, people don't know what they're doing right. Robert Lustig believes that chronic diseases will win if we don't change the way we eat. He warns of a bankrupt health care system and worries about the future of the earth. Good health and repairing the broken system starts with yourself.

Is your sugar level too high? Or does your liver profile indicate fatty liver? Robert Lustig and his critical look at today's food industry will help you improve your health. It starts with knowing that your metabolism is more important than calorie counting. 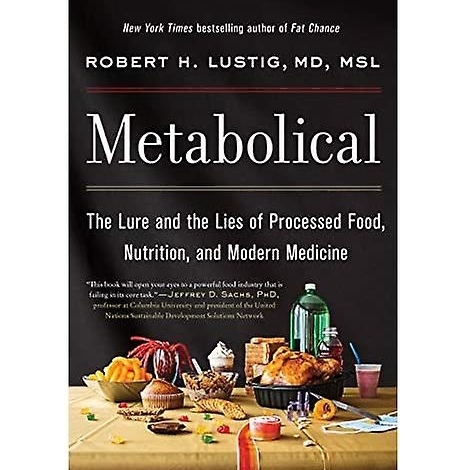 As the endocrinologist puts it so eloquently in his book MetabolicalYou are not what you eat, you are what you do with your food. In fact: you are what the food industry wants us to eat. And that is the reason why the population is becoming increasingly unhealthy. In his book, he therefore focuses on (and against) Modern Medicine, Big Pharma and the food industry.

According to the endocrinologist, it is a myth that people are responsible for what they put in their mouths. To know what you eat you need knowledge and you need to know what you are doing. But does every human being know the 56 names for sugar? No, they don't. The food industry does and it responds to that, says Lustig. On the packages the word sugar is not literally mentioned, but still it is there. And nobody knows it.

You also need access to healthy food. Some people don't have the means to do that and buy what's 'easy'. Nutrition is sometimes simply in second place. Not because it is a choice, but because there is no choice.

Lustig's war on sugar focuses mainly on fructose. According to the inspired scientist the effect of fructose is just like alcohol, but without 'the buzz'. In other words, that supposedly nice feeling that alcohol gives you.

But what exactly is fructose? Fructose is found in fruits and vegetables, processed foods like chocolate, jam and chocolate sprinkles and in soft drinks. It is a simple carbohydrate also known as 'sugar'. Another name is fruit sugar. Fructose is twice as sweet as glucose and is processed less quickly in the body. Not everyone can tolerate fructose. For some people it causes intestinal complaints such as stomach ache, a bloated feeling or even diarrhoea.

Measure your genetic disposition with one of these tests:https://www.bloodtesting.nl/fructose-intolerantie-test.html or https://www.bloedwaardentest.nl/igene-dna-basic.html

The problem with fructose is that it is not good for fat metabolism. Patients with type 2 diabetes therefore run a greater risk of cardiovascular problems. According to the Diabetes Fund it's better to choose products sweetened with glucose (also known as ordinary sugar) than with fructose.

Sugar is addictive, says Lustig. Suppose you put someone who has taken cocaine under an MRI scan and put them next to someone who has just eaten sugar, the same parts of the brain will light up. Sugar is addictive, says Lustig, who is an endocrinologist specializing in hormone disorders (such as diabetes) and metabolic diseases. From his profession it is therefore logical that he says obesity is a hormonal disorder.

In an American interview, Lustig was asked about his views on artificial sweeteners. He cited a striking example about Coca-Cola. According to the endocrinologist, the toxicity of one Coca-Cola is equal to the toxicity of two Coca-Colas Light. In other words, one normal cola is half as bad as two Light versions of it. People will wonder how that can be. After all, it has fewer calories and no fructose. And that's true, but the drinks still cause an insulin reaction that can lead to chronic illness. This is because the insulin is not converted into energy here, but leads to fat storage.

Our body cells can either burn or store energy. It is one or the other. Cells go from burning mode to storage mode because of insulin. The tongue of someone who drinks Coca-Cola Light or Zero sends a message to the brain. The brain notices that something sweet is in the body, after which the message to produce insulin is sent to the brain. Artificial sweeteners lack glucose or fructose or calories. And yet it has an insulin profile.

The endocrinologist is very clear about what he thinks of the urgency of healthcare regarding chronic diseases: there is none. Healthcare is focused on acute diseases and not on chronic diseases such as type 2 diabetes, cardiovascular diseases, dementia, high cholesterol, high blood pressure, cancer, PCOS and fatty liver. We will take a closer look at this last chronic and mitochondrial disease. How does fatty liver occur? And why is it so dangerous?

The most common causes of fatty liver disease are overweight and obesity, type 2 diabetes (also known as diabetes), metabolic syndrome or chronic alcohol consumption. Most people with fatty liver have no symptoms. Reported symptoms are upper right abdominal pain and fatigue, and in some cases people with fatty liver disease experience jaundice (yellow haze in the whites of the eyes and skin). About 20 percent of fatty liver patients develop hepatitis. This hepatitis causes chronic fatigue, itching and general malaise.

Lustig says about fatty liver that you can prevent it by keeping refined carbs and heavy metals out of your diet. Intermittent fasting, short for skipping breakfast, is not good for your liver because this diet puts the organ to work in a bad way. Your body needs to be given the opportunity to burn fat to get rid of it. Yes, intermittent fasting helps make a liver less fatty, but if it is up to the renowned doctor, you are addressing the problem in its entirety and not locally. So: eat real food. Eat unprocessed food.

What are mitochondrial disorders?

Mitochondria are in our cells and ensure that the body can function with created energy. In other words, mitochondria are our internal energy factories. In someone with mitochondrial disease, the chemical process does not work properly.

There are various mitochondrial diseases. Someone who has several of these has metabolic syndrome, a collection of complaints about the metabolism. Most complaints are about high cholesterol, high blood pressure, obesity and high blood sugar levels. Someone who eats a lot of sugars (or poison, as Robert Lustig calls it) and fats has an increased risk of metabolic syndrome. This syndrome increases the risk of developing type 2 diabetes fivefold. Often someone is already in the early stages of it.

Insulin resistance can, but does not necessarily, lead to type 2 diabetes. The main causes of this resistance are obesity and an unhealthy lifestyle. In some cases hereditary predisposition or the use of medication play a role. By losing weight, getting enough exercise and sleep, and by eating and living healthily, insulin resistance can be reduced.

Via Blood Values Test you can carry out various tests that will give you insight into how your body is functioning. For example, you can discover whether you are healthy inside and whether you have insulin resistance:

Also read the latest book Metabolical by Doctor Robert Lustig; The lure and the lies of food industry

Listen to the audio clip of the interview between Dr. Friedman and Dr. Lustig here.

I absolutely agree with this, sugar is so addictive. I personally love sweets and do everything I can to stay as far away from them as possible, but it's hard. It's just as bad as smoking, that's for sure.

I will definitely read the book. I have been looking for years for what helps with wanting sweetness in your body. Your body sometimes asks for it and I believe that deficiency in certain minerals and vitamin can be a cause of this. My advice to everyone is stay far away from it, and if you can't, watch what you eat and add what you lack. In the form of supplements if you can't manage with food, Flinndal is a website where you can order everything you need but definitely stay far away from sugar.

Sorry Maud we cannot accept advertising for the many supplement brands available.

Maud, can I point you to The New Food? Check out the website or Facebook. Great help on avoiding carbs.

Great article the truth about sugar should be a standard lecture for all students in their teenage years I can remember like many people of my age getting plain food every day and for breakfast porridge and in the evening Sandwitches. But as soon as the big companies hijacked the food companies and made huge profits from the food and even slimming companies are making even more trying to get people to reduce weight by reducing their weight only to fail because as dr Lustig stated its only a life style change that will solve the problem It is the best lecture on food Nutrition I have ever seen and the best advice costs NOTHING very Generous Dr Lustig