Is eating too much fish poisonous?

That you can get mercury poisoning by working in factories, we have often measured in blood tests. We saw elevated values in people who used to work in factories where thermometers were made. But is eating fish from the sea dangerous too? When is eating fish unhealthy?

How much fish can you eat?

The nutrition center's advice is as follows: "Fish is good for your health. Fish fatty acids are good for your heart and blood vessels. Therefore the advice is to eat fish once a week. Preferably fatty fish, such as mackerel, herring, sardines or salmon".

Do they mean at least once or maximum once? There is no problem with eating fish a few times a week. Until people start eating more fish.

If you really eat a lot of fish from the sea every day, you will get too much mercury in your blood. This shows again how polluted our environment is.

Bodybuilders need to take in a lot of protein to help build muscle.

This is a result of the blood test Jordy tried to get his protein from fish instead of chicken, cottage cheese and eggs because he is a pescotarian. 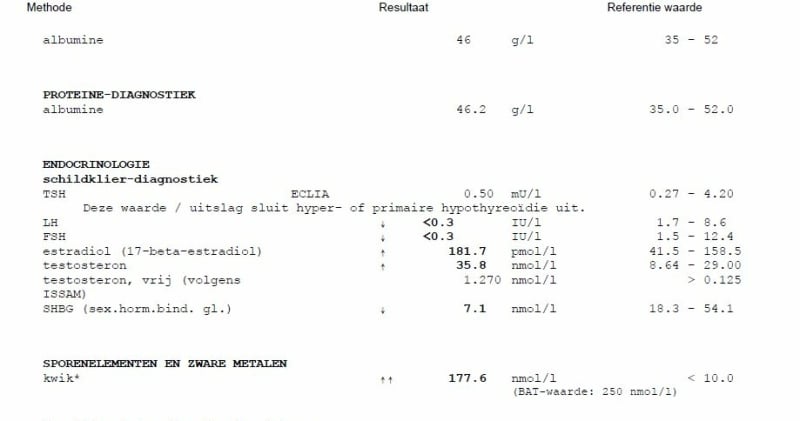 If you are a Pescotarian you do not eat meat, eggs and dairy, but you do eat fish. There are many reasons to become a pescotarian. The most important reason is that it is a lot healthier. With the vegetarian diet one is not allowed to eat meat and fish. Because pescotarians do eat fish, they often don't get enough nutrients. Besides that many pescotarians choose this diet because they think cattle is treated badly, while this is less the case with fish. They often choose to eat only wild fish and not farmed fish.

But it is precisely the wild fish that can cause you to accumulate too much mercury in your body?

How does mercury poisoning occur?

You can be exposed to mercury in different ways:

When is mercury poisoning?

Diagnosis of mercury poisoning means that you have to measure over a period of time to see if there is a chronic poisoning. Mercury concentrations in the blood should be lower than 10 nmol/l, but by eating a lot of fish a value of more than 200 nmol/l is reached.

On the lab report there is also a BAT value, which is the value that applies to people who work in factories where this substance is used, a maximum value of 250 nmol/l applies.

For example, if you are undergoing chelation therapy to detoxify, it is not useful to measure mercury in the urine, because by excreting the heavy metals, it will actually be elevated by the treatment.

The following result is good, the result of mercury in urine in relation to creatinine may be 20 and there is a value of less than 3.5 measured. The bat value of mercury in professional blood tests may be up to 150 nmol / l.

Fish contains proteins that can cause allergic reactions. The European Union has therefore decided that fish is a food allergen that can cause hypersensitivity reactions and that this must be stated on the label. Fish allergy is something you notice immediately, you don't even have to test for it because the reaction is very dangerous and acute. It is also possible that your body just can't digest fish very well, this is called food intolerance.

For example, listeria or salmonella. These cannot be seen with the naked eye, nor can you taste or smell them. Raw fish can also contain the parasite herring worm. When heated, pathogens are killed.

Due to environmental pollution, other harmful substances may also occur in fish. Such as other heavy metals, dioxins, PCBs or pesticide residues. Predatory fish are most affected by pollution. This is especially true for large predatory fish, such as sharks and swordfish. Fish that only eat plants or plankton are less polluted. Fatty fish species are also more polluted than lean ones, because harmful substances are stored in the fat. In addition, the habitat plays a role. For example, fish from European waters are more polluted than fish from the Pacific Ocean. Certain Dutch waters contain more dioxin than is good for you. For these waters there is a ban on catching wild eel or wolf crab. It is important to be careful when eating home-caught fish as the water may be polluted. Farmed fish may also contain harmful substances. This is especially true if it is fed with fish meal and fish oil.

What can you get from too much mercury?

Consuming foods containing mercury is the most common cause of mercury poisoning. Mercury poisoning can cause serious symptoms and put the body at unnecessary risk. Mercury is a naturally occurring metal found in many everyday products, albeit in small amounts. Limited exposure is safe but an accumulation of mercury can be very dangerous.

Mercury is a liquid at room temperature and evaporates readily in the surrounding air. It is often a by-product of industrial processes, such as burning coal for energy. Vaporized mercury can end up in rain, soil and water, where it poses a risk to plants, animals and humans.

Swallowing or coming into contact with too much mercury can cause symptoms of mercury poisoning.

Mercury can affect the nervous system, leading to neurological symptoms such as:

Mercury can also affect a child's early development. Children with mercury poisoning may show symptoms such as:

Mercury poisoning tends to develop slowly over time if a person comes into contact with mercury frequently. In some cases, mercury poisoning occurs quickly and is associated with a specific incident.

Anyone experiencing sudden symptoms of mercury poisoning should call a doctor or poison control.

High levels of mercury in the blood can cause long-term neurological damage. These effects may be more pronounced in children who are still developing. A study in the Journal of Preventive Medicine and Public Health noted that many cases of mercury poisoning have resulted in long-term nerve damage, which can lead to:

Mercury poisoning also poses a risk to the reproductive system. It can cause a reduced sperm count or reduced fertility and can also cause problems with the fetus.

Possible effects of mercury poisoning include malformation and decreased fetal survival rate, and decreased growth and size of the newborn at birth.

Mercury helps promote the accumulation of free radicals in the body, putting cells at risk of damage. This can lead to an increased risk of heart problems, including heart attack and coronary artery disease.

Eating seafood contaminated with mercury is one of the most common ways people accumulate mercury in their bodies. The mercury in seafood is a highly toxic form of the metal methylmercury, which is created when mercury dissolves in water.

Methylmercury can be taken up from the water by all marine animals, but also passes through the food chain.

Small marine animals, such as shrimp, often ingest methylmercury and are then eaten by other fish. These fish now contain more methyl mercury than the original shrimp.

This process continues up the food chain, so a large fish may contain much more mercury than the fish it ate. However, this does not necessarily make it better to eat smaller fish. It is always essential for a person to check the source of their seafood to avoid contaminated fish and shellfish.

People concerned about their mercury exposure may want to limit their intake of seafood, especially fish high on the food chain, such as swordfish, shark, albacore, pike, zander and perch.

Pregnant or breastfeeding women may want to avoid or limit their intake of fish and shellfish, as the mercury they contain can pass through the umbilical cord or breast milk to the fetus or child.

Old fillings can increase the risk of mercury exposure. Some people choose to replace their amalgam fillings to reduce their long-term exposure to mercury.

Mercury poisoning may also be due to direct or environmental exposure. Exposure to mercury can come from one or more of the following sources:

Treatment for mercury poisoning includes eliminating all exposure to the metal. Doctors will recommend that the person not consume seafood that contains mercury.

If mercury poisoning is related to a person's workplace or environmental exposure, doctors may suggest that the person change their environment to reduce their exposure, or that the workplace implement new safety measures.

Mercury poisoning can cause some long-term side effects, which will be treated or managed individually.

Certain types of severe mercury poisoning cases may require chelation therapy. This is the process of removing mercury from the organs so that the body can get rid of it.

The drugs used in chelation therapy bind to heavy metals in the bloodstream and are then excreted through the urine. Chelation therapy has its own risks and side effects, so it is crucial to use the medication only when necessary.

If you suspect you have a heavy metal load, ask your naturopathic doctor, natural dietician or organic dentist for further advice. He or she can test you for a heavy metal load and determine your detoxification capacity.

In addition, he or she can advise what foods and supplements you can take to support your body in getting rid of heavy metals and protect you from their harmful effects.

Want to know about your mercury levels?

Then do the test that measures mercury in your blood:

or in the urine:

About the author
Ellen van Gijsel
Website
Ellen is the founder of Blood Values Test. She gained her experience with health examinations for companies, schools and government institutions at HumanCapitalCare arbo- en gezondheidsdienst. In 2009 she became director of Diagnostics Netherlands, a collaboration between all major general practitioners laboratories in the Netherlands. At the U- Diagnostics laboratory in Utrecht, she was responsible for blood testing at GP surgeries. Until she founded Blood Values Test for individuals in 2013.
Post comment
Edit article Dashboard Settings Website Design Article cached on Tue. 7 Feb 13:42
Renew cache