in No category
5 min. reading time

How do women achieve optimal vitamin B12 levels? 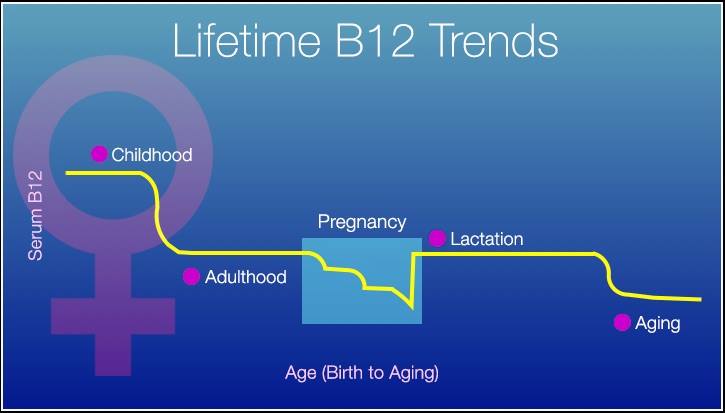 Vitamin B plays an important role in women's health. Especially during the childbearing years. An important member of the vitamin B family is B12. Unfortunately, this important molecule leaves the body quickly if not taken daily.
Read on to find out when and why women should pay extra attention to their vitamin B12 intake and what steps you can take to optimize your levels.

What is vitamin B12?
Vitamin B12 (or cobalamin) is a water-soluble essential vitamin, which plays a crucial role in making red blood cells and maintaining the brain and nervous system. It is an essential vitamin; that is, we cannot make it ourselves. This vitamin is produced by bacteria. Animals produce this vitamin through the bacteria in their digestive tract. Vegetable products therefore contain basically no vitamin B12. But before you can take advantage of vitamin B12 from a tasty roasted chicken breast, your stomach must also release a certain acid in order to absorb vitamin B12. The body's ability to absorb vitamin B12 from the body becomes more difficult as you age.
What happens when our body does not get enough vitamin B12? You're definitely familiar with the concept of anemia, where your body becomes depleted and doesn't produce enough healthy red blood cells or your blood doesn't have enough hemoglobin, which prevents oxygen from being transported to cells properly. Most people think that iron deficiency is the cause of anemia, but did you know that vitamin B12 deficiency can also be a cause of anemia?
Furthermore, low vitamin B12 levels can lead to symptoms such as numbness of the skin, tingling, poor coordination (athletes beware!), or problems with memory.
As part of the vitamin B family (along with vitamin B11: folic acid, and vitamin B6), vitamin B12 contributes to the homocysteine balance in the body. Homocysteine is an amino acid that can be produced in the human body from another amino acid, methionine. This conversion takes place with the help of enzymes. Under normal circumstances, the homocysteine produced is converted again or broken down so that the amount in the body does not increase. A homocysteine level that is too high increases the risk of cardiovascular disease and infertility. Poor nutrition and not exercising regularly increase the homocysteine level.
Healthy diet and exercise is therefore increasingly important as one gets older.

Vitamin B12 during our lifetime
During childhood, men and women have similar vitamin B12 levels. At the beginning of adolescence, vitamin B12 levels drop. Vitamin B12 levels are supposed to remain the same throughout adolescence, with the exception of a drop during pregnancy.
Adults with too low levels of vitamin B12 often had deficiencies as children.
Another cause of too low vitamin B12 can be poor nutrition, especially veganism. Only a few plants provide enough vitamin B12. For this reason it is important for vegetarians to include animal products, such as milk and eggs, and alternative products, such as fortified cereals, in their diet. If you don't get pregnant, your B12 levels will remain relatively stable throughout adulthood. Assuming you maintain a good, balanced diet. However, for some, the problem with vitamin B12 absorption arises in old age. That's because the absorption of B12 from food depends heavily on your stomach's ability to release stomach acid. Many older adults begin to produce less stomach acid as they age, which limits the ability to release B12 from food. Also, people who take stomach acid inhibitors or acid-neutralizing medications for reflux are very likely to not be able to absorb enough vitamin B12.
Vitamin B12, in crystalline form, is found in dietary supplements and fortified foods. Unlike the natural variety, this form of vitamin is absorbed even if your stomach acid is disrupted.

The effect of the menstrual cycle on vitamin B12 levels.
There is not much research on the effect of menstruation on the B12 level. However, the levels of men and women do not differ significantly by age. In addition, the decline in B12 levels at a later age does not coincide with menopause. So no extra problem for women? Studies do show that hormonal contraceptives cause a significant drop in B12 status.

B12 and pregnancy
Most women experience a decrease in vitamin B12 levels during pregnancy. In most cases, this change is normal and not a cause for concern. It is normal for the vitamin B12 level to drop by 30% during this period. Just a few days after delivery, the level will return to normal. However, if you already have a low level of vitamin B12 before you get pregnant (note vegetarians!), it is important to get the right level before you get pregnant. Women who are already low in vitamin B12 are more likely to suffer from anaemia, which increases the risk of miscarriage. The necessity of folic acid intake during pregnancy is well known, to prevent a cleft lip or spina bifida. However, low levels of vitamin B12 also increase the risk of birth defects. Consult your doctor before adding or removing supplements from your diet.

What can I do to manage my vitamin B12 levels?
Get your blood tested! At Blood Values Test or at your doctor's office. InsideTracker will tell you what you need to focus on to optimize your vitamin B12 levels and provide you with dietary advice, which supplements you can take and which exercise recommendations apply to you. Besides vitamin B12, other important vitamins and minerals are also screened.