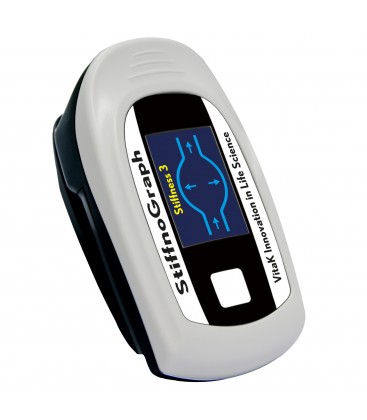 In 2017, Blood Values Test presented the VitaK meter as a first at the National Health Fair. Since then, vitaminK2 vascular meters (APG; acceleration photoplethysmogram meters) have appeared on the market under several names.

The vitamin K2 vascular meter is clamped on the fingertip and analyzes, without taking blood samples, the condition of the blood vessels within two minutes. Too little vitamin K2 causes arteriosclerosis, high blood pressure, risk of heart attack and osteoporosis, but is also associated with Alzheimer's disease and prostate cancer. Vitamin K2 causes fat burning and prevents weight gain after dieting.

The scientific research behind the Vitamin K2 measurement was developed by Professor Vermeer from the University of Maastricht. The meter measures the blood flow in the small blood vessels. This is used to map the vascular characteristics. Numerous scientific articles have shown that increased vitamin K2 intake can promote public health and contribute to reducing mortality from cardiovascular diseases.

Arteriosclerosis also occurs in healthy people when their vitamin K levels are not optimal. It increases the risk of high blood pressure and heart attack. A vitamin K deficiency is thought to play a role in 23% of all cardiovascular diseases. Vitamin K2 is also essential for healthy bones.

What is vitamin K?

Vitamin K is more important to our health than we thought. The vitamin not only supports blood clotting, a function of vitamin K that has been known for a long time. Newborns are therefore prescribed vitamin K. This is usually vitamin K1 (phylloquinone). But there are several vitamin K's. Vitamin K2 (menaquinone) is essential for production of a special tissue protein that, by binding calcium, helps keep the artery wall, joint cartilage and other soft tissues in the body supple and clean. In addition, vitamin K2 is essential for bone protein that plays an important role in the formation and maintenance of healthy, good bone tissue.

Vitamin K2 is found mostly in fermented Japanese foods like Natto. With us, you find it in cheese and cottage cheese.

Enough vitamin K2 ensures that calcium from your diet is used to strengthen bones instead of calcifying veins. Vitamin K2 also helps you lose weight, it prevents you from gaining weight after your diet, vitamin K2 causes fat burning.

Research at Maastricht University shows that vitamin K2 not only prevents arteriosclerosis, but also makes stiffened blood vessels elastic again. This study confirms for the first time the link between vitamin K2 and cardiovascular disease.

In the same study, positive results emerged before. For example, in 2013 it was shown that vitamin K2 also has a beneficial effect on bone strength. Bone calcification is inhibited in postmenopausal women by additional administration of vitamin K2.

In conditions, where the absorption of fat-soluble vitamins in the gut is disturbed, such as Crohn's disease and celiac disease (gluten allergy), an insufficient vitamin K2 level may occur. In this case, measurement of vitamin K status may be of additional importance. This also applies to groups at increased risk of cardiovascular disease.

Why not measure it in blood?

For a shortage of other vitamins, do the Vitamins and Minerals Gold test or the National Health Check.

Visit Bloodtesting.nl at the National Health Fair for a free Vitamin K measurement

The National Health Fair will take place from 7 to 10 February 2019 in the Jaarbeurs in Utrecht.

How do I interpret the results of my test at the National Health Fair?

Stiffening and calcification of the blood vessels are strong risk factors for high blood pressure, arteriosclerosis and cardiovascular disease. By using the VitaK-Meter this process can be detected at an early stage and then be slowed down by adjusting the diet and by taking extra Vitamin K2 (menaquinones). Depending on age and vascular stiffness an index is given. At 1 the vessels are supple, at 2, 3, 4, 5 and 6 there is an increasing stiffness and calcification of the blood vessels.

After 1 to 2 minutes you will see 3 numbers

Vitamin K2 is available from the better vitamin supplier under the name NutriMK7 or MenaQ7.

For more information on how to supplement your Vitamin K2 see these videos:

Blood Values Test does not provide supplements, as we are independent in our measurements

You can order the vitamin K2 vascular meter here:

I am on blood thinners and it is my understanding that you cannot take vit K or k2 then? What do you advise me?

Dear Sonja, at the National Health Fair there is Mr. Arts, he is an orthomolecular therapist, he can answer this question. You can also send an email and we will forward this question.

Where can I buy a Vitakmeter?

My husband has an aneurysm on the aorta (stable) And has to take anticoagulant . Now my question is....May he vt.k Kind regards Miny

Why does it say A only in the elderly? Does that mean that everyone up to the age of 60 must then start taking vit K? How else do you know how much K is in your daily food?

How is vitamin K measured at the 2019 health fair?